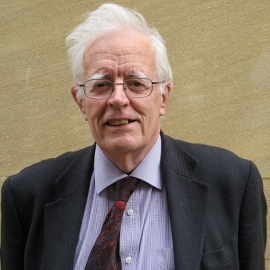 It is with much sadness that I heard from Oxford yesterday that David Cox had passed away. Hither goes a giant of the field, whose contributions to theoretical and methodological statistics are enormous and whose impact on society is truly exceptional. He was the first recipient of the International Prize in Statistics in 2016 (aka the “Nobel of Statistics”) among many awards and a Fellow of the Royal Society among many other recognitions. He was also the editor of Biometrika for 25 years (!) and was still submitting papers to the journal a few month ago. Statistical Science published a conversation between Nancy Reid and him that tells a lot about the man and his amazing modesty. While I had met him in 1989, when he was visiting Cornell University as a distinguished visitor (and I even drove him to the house of Anne and George Casella for dinner once), then again in the 1990s when he came on a two-day visit to CREST,  we only really had a significant conversation in 2011 (!), when David and I attended the colloquium in honour of Mike Titterington in Glasgow and he proved to be most interested in the ABC algorithm. He published a connected paper in Biometrika the year after, with Christiana Katsonaki. We met a few more times later, always in Oxford, to again discuss ABC. In each occasion, he was incredibly kind and considerate.

jthaman
reply
A great loss for the community.
Maryland

Summary Experimental design and analysis has evolved substantially over the last 100 years, driven to a large extent by the power and availability of the computer. To demonstrate this development and encourage the use of experimental design in practice, three experiments from different research areas are presented. In these examples multiple blocking factors have been employed and they show how extraneous variation can be accommodated and interpreted. The examples are used to discuss the importance of blocking and treatment structures in the conduct of designed experiments.
Read the whole story